In addition to the Quarterly Journal, The Society for Army Historical Research has also produced a number of special publications, the latest of which are featured below. 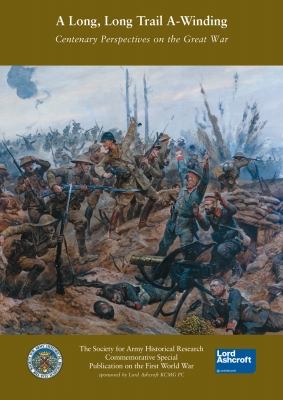 ‘THE MAD MINUTE’ RAPID RIFLE FIRE, AND ITS PLACE IN THE EDWARDIAN ARMY by Nicholas Harlow.

PADRES AND MISSIONARIES: THE WAR DIARY OF THE SENIOR CATHOLIC CHAPLAINS, EAST AFRICA, 1916-1919 by James Hagerty.

RAWLINSON ON THE SOMME by Rodney Atwood.

‘SAVING THE GUN AT LE CATEAU’ THE STIRRING TALE OF A PAIR OF VICTORIA CROSSES WON IN THE FIRST LARGE-SCALE ACTION OF THE WAR by Michael Naxton.

THE EIGHTH DAY: BRITISH DEFENCE AND GERMAN OFFENCE ON 28 MARCH 1918 by Charles More.

SHOWING THE LINE ON THE WESTERN FRONT IN WORLD WAR ONE by Mike Meech.

THE GREAT WAR AND THE MIDDLE EAST: A STRATEGIC STUDY by Rob Johnson, reviewed by James E. Kitchen.

A MOONLIGHT MASSACRE: THE NIGHT OPERATION ON PASSCHENDAELE RIFGE, 2 DECEMBER 1917 - THE FORGOTTEN LAST ACT OF THE THIRD BATTLE OF YPRES by Michael LoCicero, reviewed by Charles Messenger.

DIE IN BATTLE,DO NOT DESPAIR: THE INDIANS ON GALLIPOLI, 1915 by Peter Stanley, reviewed by Kaushik Roy.

THE BRIDGE TO AIR POWER: LOGISTICS SUPPORT FOR ROYAL FLYING CORPS OPERATIONS ON THE WESTERN FRONT, 1914-1918 by Peter Dye, reviewed by James Pugh.

'ALLIES ARE A TIRESOME LOT': THE BRITISH ARMY IN ITALY IN THE FIRST WORLD WAR by John Dillon, reviewed by Vanda Wilcox.

AN ARTIST'S WAR. THE ART AND LETTERS OF MORRIS & ALICE MEREDITH WILLIAMS by Phyllida Shaw, reviewed by Peter Cormack.

COMMENTS ABOUT THE BOOK

"... I joined the Society to be able to access high quality military historical material, and this volume represents exactly what I wished for ..."

"Everything about it smacks of the care and attention put into it and it is a fine tribute to the memory of all those gallant men who fought between 1914 and 1918  well done SAHR!" 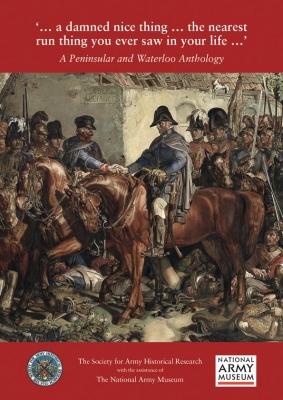 The soft-back, A4 sized book is illustrated extensively in colour across its 175 pages and includes:

All members received a copy as part of their subscription at the end of 2015, but anyone interested in the Napoleonic Wars may wish to acquire a copy. It was very well received by members as the following comments indicate:

"Warmest congratulations to you and the contributors on the Waterloo Special ... You have done a marvellous job."

"What a super surprise, the Christmas present just arrived from SAHR! ... You have worked extremely hard to edit this excellent commemoration of Waterloo and I am sure that every member will enjoy it."

"... congratulations on producing a magnificent publication, beautifully presented and illustrated ..."