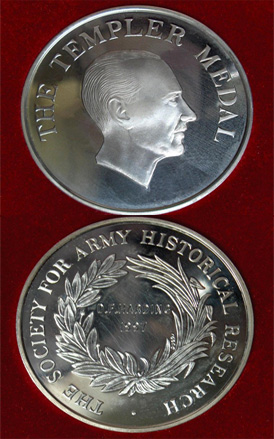 2015 : Wellington: Waterloo and the Fortunes of Peace by Rory Muir. Published by Yale University Press.

2009 : Bloody Victory: the sacrifice of the Somme and the making of the twentieth century by William Philpott. Published by Little Brown.

2003 : Phoenix from the Ashes: The Indian Army in the Burma Campaign by Daniel P. Marston. Published by Praeger.

1996 : The English Ordnance Office, 1585-1625: a case study in bureaucracy by Richard W. Stewart. Published by the Boydell Press for the Royal Historical Society.

1995 : British Victory in Egypt 1801: The End of Napoleon's Conquest by Piers Mackesy. Published by Routledge

1993 : To Long Tan: The Australian Army and the Vietnam War 1950-1966 by Ian McNeill. Published by Allen and Unwin in association with the Australian War Memorial.

1992 : Politics and Military Morale: Current-Affairs and Citizenship Education in the British Army 1914-1950 by S.P. Mackenzie. Published by the Clarendon Press.

1991 : The Crimean Doctors. A History of the British Medical Service in the Crimean War by John Shepherd. Published by Liverpool University Press.

1985 : From Waterloo to Balaclava: Tactics, Technology and the British Army 1815-1854 by Hew Strachan. Published by Cambridge University Press.

1983 : For the sake of Example: Capital Courts-Martial 1914-1920 by Anthony Babington. Published by Associated University Press.

1982 : A History of the British Cavalry, Volume 3: 1872-1898 by Marquess of Anglesey. Published by Leo Cooper in association with Martin Secker & Warburg Ltd.

2018 : 'Learning to Fight: Military Innovation and Change in the British Army 1914-18' by Aimée Fox. Published by Cambridge University Press.

2014 : 'Disease, War, and the Imperial State: The Welfare of British Armed Forces during the Seven Years War' by Dr Erica Charters. Published by Chicago University Press.

2020 : Winner Schools Vivekaditya Sapru (University of Toronto Schools, Canada)
'Terror in the Tropics: An Analysis of the British Armys Counter-insurgency Success in Malaya, 1948-1960'

2019 : Runner-up Rosie Knighton (The Leys School)
To what extent was Sir Douglas Haig the most successful British theatre commander in the integration of technology into operational planning in the period from the Crimean War to the defeat of Imperial Japan (1853-1945)?

2018 : Runner-up Schools Adam Down (Home Schooled)
The Scots Greys At The Battle of Waterloo

2018 : Runner-up Undergraduate Benjamin Sharkey (University of Birmingham)
What was the role of British Military costume in creating a visual empire?

2016 : Winner Schools Freddie Hyde (Sale Grammar School)
Who was responsible for the Charge of the Light Brigade?

2015 : Winner Undergraduate Matthew Mallia (University of Malta)
Galloping at everything: Wellington and the British Heavy Cavalry charge at Waterloo

2014 : Winner Undergraduate Filip Kurowski (University of Birmingham)
Wandering in the Desert: What kind of difficulties did the British Army encounter during the North African Campaign 1940-1943?

2014 : Winner Schools Toby Clark (Bloxham School))
An investigation into the wartime experiences of three generations of the Cartwright family

2014 : Runner-up Undergraduate Christopher Batt (University of Birmingham)
To what extent was the Allied victory in the Peninsular War due to the performance of the Duke of Wellington and his British troops?

2014 : Honourable Mention Schools Shakil Karim (Harrow School)
To what extent did the Battle of Jutland change the course of the blockade of Germany in the North Sea?

2013 : Winner Undergraduate Alice Parker (University of Liverpool)
To what extent were the officers and men of Wellingtons army responsible for the negative image of Britains role in the Peninsular War (1808-1814), that has to a very large extent held sway in Spain right down to the current era?

2013 : Runner-up Undergraduate Liam Davison (University of East Anglia)
Wilderness of Warfare? To what extent can it be argued that conventional military tactics failed in the Anglo-French war in North America 1754-1760?

2012 : Winner Christopher Cottrell-Mason (Gonville & Caius College, University of Cambridge)
How far did the British security forces help bring about a solution to the Troubles in Ireland?

2012 : Runner-up James Vitali (Sherborne School)
The British Army and D-Day: Why were the British Forces more successful than the Americans on the day?

2009 : Winner Christopher Choy (University of Kent)
Last stand on the Imjin River: Could the loss of the 1st Battalion, Gloucestershire Regiment have been averted?

2019 : 'The Passage to India' (Winner) by Allan Mallinson. The latest instalment in his Mathew Hervey series of novels.

2019 : 'Major Tom's War' (Runner-up) by Vee Walker. Her debut novel, about an officer of Indian cavalry during the Great War.