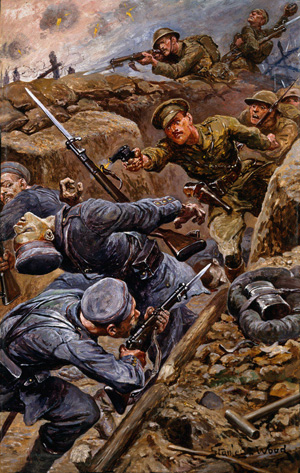 'Captain Young winning the Military Cross during the Battle of the Somme, 1916' by Stanley Llewellyn Wood (National Army Museum)

Please check back regularly for all our latest event reports.

Rogues with Rifles: The 5/60th Rifles in the Peninsular War by Robert Griffith

Templer Lecture: Prof Helen Parr on 'Our Boys: The Story of a Paratrooper'

Council Member Eamonn O'Keeffe to appear on BBC's "Who Do You Think You Are?"

Templer Lecture - Waterloo: The Campaign of 1815

Helion From Reason to Revolution Conference

Lecture  "A breach between the two services": Lord Chatham and the 1809 Walcheren Expedition

On 25 April the Society gathered at RUSI in London for its AGM, and to honour the winners of the Templer Medal and the Student Essay Prize.

Erica Charters - 'Manpower and State Power in the Eighteenth Century'

'Manpower and State Power in the Eighteenth Century: Technologies of Knowledge in Franco-British Wars'

Challenges Faced by the UK High Command in Iraq and Afghanistan.

Emile Simpson  War from the Ground Up

Emile Simpson  War from the Ground Up: Twenty-First Century Combat as Politics