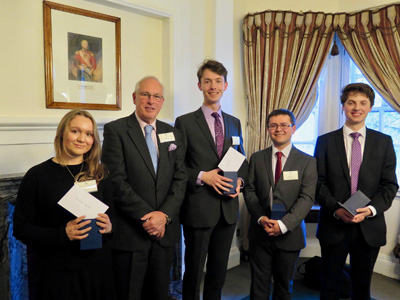 The Society for Army Historical Research (SAHR) conducts an Essay Prize Competition to encourage, and reward, research and writing undertaken by those in schools and universities. This is done every year by identifying, from appropriately submitted pieces of work, the best essay written on an aspect of the history of the armies of Britain and the Commonwealth, and from this year is in association with the National Army Museum.

The competition is open to both University Undergraduates and School Sixth Form Students regardless of nationality and country of residence. There are two categories of entry: 'Undergraduate' and 'Sixth Form'. The winner in each category will receive a prize of £300 and the runner up a prize of £100; both will also receive an engraved commemorative glass.

The essay does not have to be written "from scratch"; the Society is happy to consider essays already written, for example as course work, as long as they meet the criteria for entry and have not been published elsewhere either electronically or in print.

To accommodate the Academic year the latest date for submissions is 15 February in the year following the competition year.

Prize winners and their parents, or a friend or tutor, will be invited to the Templer Medal and Student Essay Prize awards reception. Traditionally, this event takes place in the presence of Society Members every April in London; as next year marks the Centenary of the Society the event will be even more prestigious than usual.

Previous winners have informed us that winning the prize has enhanced their applications for university. One Undergraduate said that his win directly contributed to the success of his application to undertake a postgraduate degree.

Click on the links below to read our prize-winning essays: