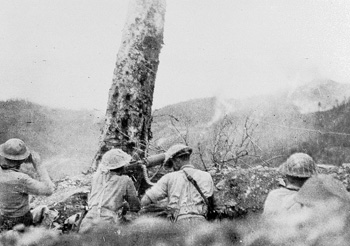 'Gurkhas during an attack on a hill near Palel, April 1944, Burma Campaign' (National Army Museum)

As amended at the Annual General Meeting 2021.

The name of the Society shall be 'THE SOCIETY FOR ARMY HISTORICAL RESEARCH', Registered Charity No 247844

The objects of the Society shall be the encouragement and development of Army Historical Research and the promotion and maintenance of regimental and military traditions by means of a charitable character, including:

The Society shall have the following honorary positions the holders of which shall not be officers of the Society:

And the following functionaries who shall be Officers of the Society:

The Council shall have power to call an Extraordinary General Meeting at any time, and Council shall call such meetings if so required in writing by no fewer than ten individual members. Fourteen clear days' notice of such meeting shall be given to members.

Alteration to these rules shall require the assent of two-thirds of those members present and entitled to vote at an Annual General Meeting or Extraordinary General Meeting. A resolution for the alteration of the rules must be received by the Honorary Secretary of the Society at least six weeks before the meeting at which the resolution is to be brought forward. At least 14 days' notice must be given by the Honorary Secretary to the members and must include notice of the alteration proposed. No alteration shall be made to Clause 2 (OBJECTS), Clause 11 (DISSOLUTION) or this clause without the prior approval in writing of the Charity Commissioners or other authority having charitable jurisdiction; and no alteration shall be made which would have the effect of causing the Society to cease to be a charity in law. A formal record of amendments to the Constitution shall be kept including the date/s when such amendments are proposed and the date of the Annual General Meeting at which such amendment or such further adjusted amendment is assented to by the Members. Dated copies of the new Constitution shall be provided to the President and all members of Council by the Secretary before the next Council meeting after the Annual General Meeting at which the amendment was incorporated. New Members of Council co-opted before the next Annual General Meeting shall receive a copy of the Constitution at the time of their acceptance onto Council.

The Society may be dissolved by a resolution passed by a two-thirds majority of those members present and entitled to vote at an Extraordinary General Meeting convened for the purpose of which fourteen days' notice shall have been given to the members. Such resolution may give instructions for the disposal of any assets held by or in the name of the Society, provided that if any property remains after the satisfaction of all debts and liabilities such property shall not be offered for sale to or distributed among the members of the Society, but shall be given or transferred to such other charitable institution having objects similar to some or all of the objects of the Society as the Trustees shall determine and if and in so far as affect cannot be given to this provision then to some other charitable purpose.